Overview of the history of Italian art

Biographies some painters, sculptors and architects among the greatest exponents of Italian art

Very little is know about the youth and training of Giotto, except that he was born in a family of peasants in about 1267, in Colle of Vespignano near Florence.
He was a pupil of Cimabue and worked with his teacher on some works. It is highly unlikely that Cimabue understood the talent of his pupil by looking at him draw one of the sheep he had led to graze, despite the very popular legend.
A very important part of Giotto’s training was the journey to Rome before joining the construction sites in Assisi. An important school of painting was developing in Rome in those years and included Pietro Cavallini, Jacopo Torriti and Filippo Rusuti, who painted with classical art monumentality. 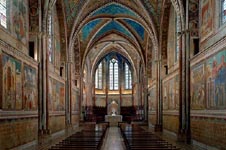 After the period in Rome Giotto worked in Assisi. The basilica of St Francesco d'Assisi is made up of two overlapping churches. The lower basilica has a complex plan with chapel with paintings by a number of artists. The upper church has a unitary and clearly understandable iconography: episodes of the old and new Testament are connected by pictures of the life of St Francis according to the biography of St Bonaventura written in about 1260.
Between 1277 and 1280 Cimabue started decorating the left transept of the upper church but the frescos were finished by his followers, including Jacopo Torriti and Duccio da Boninsegna. He decorated the space between the windows of the nave with stories of the old and new Testament; some of these were probably painted by Giotto (his style can be seen in the two Stories of Isaac and in the fragmented Deposition in the grave).
Giotto is the author of the lower decorations, beneath the windows, along the nave. There are 28 rectangular frescos (270x230 cm) showing episodes from the life of St Francis. The saint is, for the first time, a man who walks among people, in a landscape, among buildings, in easily recognisable places. Examples of this are in: the Renunciation to worldly possessions (the saint is half naked), death of the knight of Celano, Homage of a simple person and Nativity scenes of Greccio, where the search for perspective is clearly evident. In these scenes Giotto refused all Byzantine elements and frontal and bi-dimensional representation of holy scenes, which are painted in a life-like setting. In the fresco where St Francis gives his cloak to a poor man (one of the first paintings) there are elements typical of Giotto’s art (careful use of chiaroscuro to achieve volume, perspective and the attempt of creating a harmonious, non-static, composition).
Giotto returned to Assisi at a later date for the decoration of the vault of the lower basilica with Franciscan Allegories and the decoration of the chapel of Magdalene.
During the years spent painting the frescos of Assisi Giotto also painted a board depicting the saint receiving the stigmatas on a golden background (now in the Louvre). The painting was for the church of St Francesco in Pisa where some episodes of the saint’s life are shown.
In 1300 in Rome he painted some frescos (none have survived; the fact is recorded in documents of the time). Giotto then returned to Florence where he painted more pictures (some are fragmented, like the great board with the Crucifix in the sacristy of the church of Santa Maria Novella, where the Byzantine elements have clearly been discarded; the representation of a nail, used for the feet of Christ on the Cross, which induces the 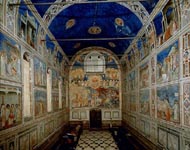 legs to overlap, creates a perspective effect).
Between 1304 and 1306 Giotto worked in Padua and decorated the Scrovegni chapel, built by Enrico Scrovegni to atone for the sins of his father, condemned to the tortures of Hell by Dante in the Divine Comedy.
The pictures in the chapel exalt the Madonna; the back of the facade is the picture of the Last Judgement (many parts were painted by his pupils rather than by Giotto himself). On the sides and on the triumphal arch, divided into three different types of decoration, are the Stories of Joachim and Anne and the Stories of the life and of the passion of Christ. These clearly show how the artist’s style had matured, particularly the kiss of Judas and Lamentation over the Dead Christ.
Before 1310 he painted the Madonna di Ognissanti, in the great altar piece (325x204 cm), now in the Uffizi of Florence, where a typical element of gothic culture is elaborated and renewed.
In 1320 he returned to Florence; most of his works from this period did not survive or were divided and scattered in various museums all over the world (as the Polyptich with Scenes of the life and of the passion of Christ, divided between the Horne Museum of Florence and the National Gallery of Art of Washington).
His tendency to physically and psychologically characterise the characters he paints can be seen in the decorations of the Peruzzi and Bardi chapels, in the church of Santa Croce in Florence. Today there are two chapels but there should have been four.
The Peruzzi chapel was decorated with Stories of St John the Baptist and of St John the Evangelist. The buildings’ architecture is complex and the artist’s interest in perspective is becoming increasingly clear.
In the Bardi chapel the Stories of St Francis were painted; the chapel was unfortunately damaged during the centuries and the cycle of paintings was damaged with it. The Polyptich of the Virgin, painted after the Bardi chapel, is in the Baroncelli chapel.
Between 1328 and 1333 Giotto went to Naples where he painted many pictures for king Robert d’Anjou. None have survived. He then went to Bologna where he worked on the Polyptich of Bologna (now in the National Picture Gallery ).
He painted the Stefaneschi Polyptich (Vatican Picture Gallery) for the main altar of the basilica of St Peter. In 1334 he became "magister et gubernator" of the work of Santa Reparata, i.e. of the construction site of the duomo of Florence, where he built the first floor of the bell tower, known as Giotto’s bell tower.
In 1335-1336 he was in Milan, in the court of Azzone Visconti but nothing is known about these years. He returned to Florence and died on 8th January 1337 at the age of 70.

Storiadellarte.com is a site created in 2000 for amateur purposes. It presents an overview of the main artistic periods and some of the biographies of the most illustrious artists in the history of Italian art.